16 Best Off Grid and Homesteading Shows on Netflix

With 2020 shaping up to be an unpredictable year of crisis and chaos, it’s no wonder more and more people consider moving off-grid.

Whether it’s your dream to live in a tiny house or an underground house, there’s more mention of these alternative lifestyles in our culture than ever.

Are your homesteading dreams on pause because of the lockdown?

No worries! Check out these homesteading shows to keep your wheels spinning towards your off-grid goals.

This British reality show introduces you to a number of people who have found clever ways to live without the burden of rent or mortgage payments. Learn about the sacrifices and compromises they’re willing to make in order to gain financial freedom.

Did you know that more than 60% of Millenials claim they would live in a tiny house?

This show published by Netflix explores the giant movement of tiny houses. Take a peek into the world of tiny house design and construction on this fascinating show.

This series demonstrates the potentials of the once humble cabin to be a well-designed, gorgeous tiny living space. Designers and architects were invited from around the world to create one-of-a-kind mobile cabins in beautiful Wales.

This 2017 documentary is a travelogue accompanying a young German couple’s journey out of the big city into the dream of the North American road trip.

Watch the trailer to get a sense of the joys and setbacks of taking an old school bus out on the road:

We all know that money doesn’t buy happiness, but we tend to try anyway. Minimalism goes hand in hand with the philosophies of homesteading and living off-grid.

Here’s the trailer to entice you into off-loading your unnecessary stuff and find meaning in having less:

One of the newest homesteading TV shows, Win the Wilderness chronicles a competition between six British couples to win the ultimate prize of inheriting remote Alaskan property.

As you might assume, the prize property is completely off-grid, with power coming from truck batteries and solar. For drinking water, the inhabitants have to collect snow in the winter and roof run off in the summer.

If you love competition and basic off-grid reality shows, you’ll love this series that combines the two.

Tired of documentaries? Check out this British drama based on the memoir of William Kamkwamba. This is the story of a schoolboy who seeks to save his village from a debilitating drought and plans to design and build a windmill in order to run an electric water pump.

Watch the trailer for this inspirational story about a young boy in Malawi right here:

Tidying guru Marie Kondo teaches you how to only have what you need in this TV show developed for Netflix. America became captivated with this Japanese organizing consultant after she released her book The Life-Changing Magic of Tidying Up.

We all feel like we need to clean house from time to time, but few people have inspired such a movement of minimalism in America as Marie Kondo.

Watch the trailer to see if this show sparks joy in you:

Getting some cabin fever in your homestead? Why not travel around the world with Zac Efron?

Check out the trailer here to learn more about this show about living off the grid around the world and the potentials for sustainable lifestyles:

You can’t have a legitimate list of homesteading documentaries without delving into the world of food production.

Here’s the trailer for a show that will help you remember why you’re dedicated to producing your own food:

This Bear Grylls show is unlike any other, as it involves the interaction of the audience. Watch the trailer to get a sense of how you can help dictate the life or death choices Grylls makes:

Here’s a big picture look at the impact of climate change on all living creatures around the world. The trailer gives you a taste of the gorgeous and thought-provoking series. If you weren’t already convinced, you should know that the narrator is the legendary David Attenborough.

Have you always been a bit of a gearhead? Check out this TV series where the BattlBox crew tests survival and outdoor gear in the most extreme ways.

Check out the trailer for this fun and exciting series:

Not everyone lives in the suburbs. On this show, you’ll take a look at hardy people who contend with extreme conditions in their daily life. In the trailer, you get a taste of the type of lives you’ll have the privilege to peer into.

This controversial film looks into the effect that animal agriculture has on environmental destruction. Check out the trailer and judge for yourself.

Here’s a show about living off grid that follows a man in one hundred days of isolation in the wilderness. If you’re looking for a meditation on our relationship with nature and society, check out this Spanish documentary.

These Homesteading Shows Will Keep You Educated and Entertained!

It’s ultimately very optimistic that there is such public interest in homesteading shows. It points the fact that our culture is starting to question the notions of unchecked materialism, progress, and environmental destruction.

Living on a Boat – Sailing Uma

Converting a Van into an Off-Grid Camper Without Any Experience

Living on a Boat – Sailing Uma

We fell in love with the off-grid life after long days of daydreaming about the freedom it offers, the challenges it pushes it to overcome, and the positive environmental impact it has on our planet. After testing the waters, we’ve put together this blog to share our knowledge and inspire others. 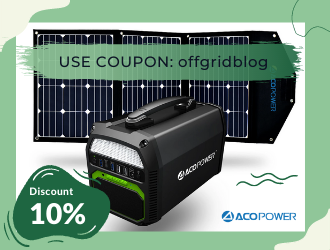 Off Grid Blog uses cookies to improve your experience. We'll assume you're ok with this, but you can opt-out if you wish. Accept Read More